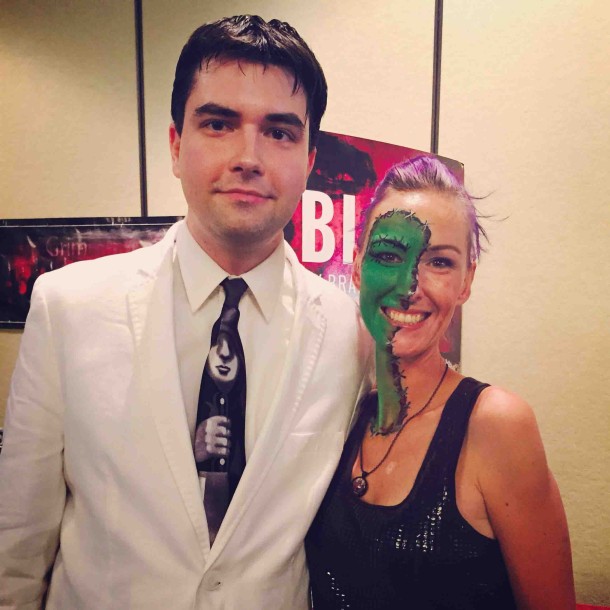 I began the year at Monster Mania, a three-day horror convention held in Cherry Hill, NJ at the Crowne Plaza Hotel. Monster Mania is known for being one of the largest horror conventions on the East Coast and was at least four times bigger than any con I’d previously attended. Promoter Dave Hagan has a stellar reputation, and even non-horror fans would be impressed by the large attendance and sheer size of the show.

Some of the more prominent movie stars in attendance, including Tobin Bell from the Saw films and Kane Hodder from Friday the 13th, attracted very long lines. Fans had to wait upwards of an hour for an autograph or picture from their favorite movie monster.

Sunday was the slowest day of the show, but that’s usual for any three-day convention. I didn’t mind the smaller crowds because it was easier to move through the aisles and one was less likely to get stuck in a human traffic jam. People who may have been turned off by the large Friday and Saturday crowds could purchase a separate ticket to Sunday’s show and leisurely browse the DVDs, posters, and other memorabilia on display. I even saw 80’s actor Judge Reinhold, a guest at the show, strolling around the vendor booths with his wife and small child.

The weekend ended as my best signing to date. My hand was sore from autographing so many books, and I ultimately sold out of my wares. I was back in Cherry Hill for Monster Mania’s next convention held at the end of July. With the Crowne Plaza hotel booked solid I used Airbnb for the first time. The owner left me a bottle of 4 Roses Bourbon, and with Krispy Kreme doughnuts across the street, I couldn’t have felt more at home.

A lady stopped by my table and said: “I loved your book and read it all in one night!” Horror fans are the best fans in the world. They are loyal to their favorite films and books, very vocal and willing to champion any new work that adds to the genre they love.

The show’s headliner, Neve Campbell, made one of her first-ever horror convention appearances. As a child when the first Scream movie was released, I was at a prime age to be swept up in the fandom and horror hysteria that followed. The cast of Scream, heralded as the new scream queen and kings, graced the cover of every movie magazine during the mid-90s. The critical and financial success of Scream ushered in a half-decade revival of the slasher sub-genre, though the Wes Craven directed film remains the best example of pre-millennial horror. All four Scream movies screened during Monster Mania, and I had a chance to reacquaint myself with the quadrilogy. The original is the best and holds up remarkably well, but I contend that three out of the four entries are worth watching and range in quality from good-to-great. 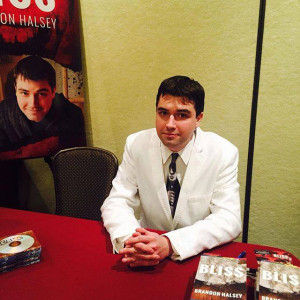 There were also other film screenings at Monster Mania, and I was able to attend the showing of one of my favorite horror films: TerrorVision. An underrated horror-comedy from the late 80s, written and directed by Ted Nicolaou and produced by Charles Band, TerrorVision stars cult-icon Gerrit Graham, who was in attendance, and Factory superstar and Warhol muse Mary Woronov. The song that plays over the credit sequence may be the catchiest in film history.

I was also able to sit in on the Malcolm McDowell Q & A. The iconic British actor was very entertaining, regaling the audience with behind-the-scenes stories about both his classic and some not-so-classic films. 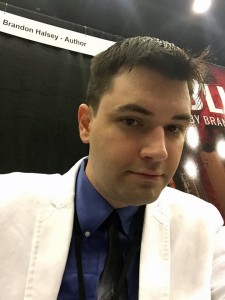 On a morning in September, I traveled to upstate New York for Scare-A-Con, a convention held at the Turning Stone resort and casino in Verona, NY. The vendors put the finishing touches on their booths, making sure the hottest and best-selling items were displayed at the front of their tables, positioning their posters and film stills, so the overhead lights reflected off the bloody artwork in the most eye-catching way.

The ballrooms at the Turning Stone resort filled with vendor tables pushed tightly against the walls and organized into aisles. There were many items for sale, ranging from movie posters to action figures to celebrity autographs.

When the doors opened hundreds of horror fans spilled into the main ballroom. They pushed past each other; forging a path to whatever booth they found the most interesting. Some horror aficionados, who had been attending conventions for years, were now old enough to have children of their own and brought along the little tykes, eager to instill a love of the macabre upon the new generation. There were others in their forties, fifties or older, classic horror fans who relived their youth as they walked up and down the aisles, browsing the posters advertising B-movies and double drive-in features from a bygone area. 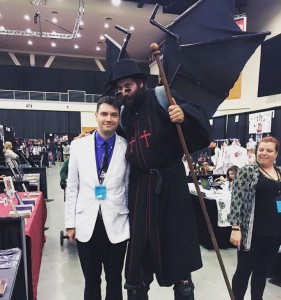 I met Ken Foree, star of my favorite horror film of all time – 1978’s original Dawn of the Dead. Character actor Barry Bostwick also visited the convention; he sold autographed pairs of underwear in honor of his Brad Majors character from The Rocky Horror Picture Show. I’ve probably rewatched The Rocky Horror Picture Show more than any other movie. I first saw RHPS at an impressionable age, and the film is no doubt responsible for some of my more liberal views, support of LGTBQ issues, and general open-mindedness. I own RHPS on Blu-Ray, attended many midnight screenings, and even saw the Broadway revival a few years back.

Unlike some other cons I’ve been to, many other horror authors appeared at Scare-A-Con. Despite the fact we were all competing for the same readers, I found the other writers to be very genial and generous. 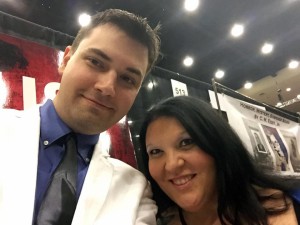 My final show of the year was Bizzare AC, held at the Chelsea Hotel in Atlantic City. There were fewer celebrity appearances than at other horror conventions, and Bizarre AC tended to focus more on offering an interactive experience; the con featured zombie walks, costume contests, and poolside rock shows. There was a retro arcade set up in the lobby, and I was able to relieve my childhood playing games like Zombies Ate My Neighbors and ClayFighter for the Super Nintendo and Sega Genesis.
My favorite attraction was a 28 Days Later zombie obstacle course in the Chelsea Hotel parking garage. Anyone brave enough to run through the obstacle course wore a flag that hung from their belt. The challenge was to run through the parking garage without losing your flag to a horde of flesh-eaters. I ended up as one of the infected. Zombies are very handsy, and it wasn’t long before the undead creatures grabbed my flag.

There were still a few known actors at the convention, including Brian O’Halloron who is best known for Clerks. I met Brian at Weekend of Fear, and he’s a very nice guy. Eric Roberts, terrific at playing psychopaths in films like Star 80 and Final Analysis, is smart with his money; many times throughout the weekend I saw him haggling over prices with the vendors.

I lost both of my paternal grandparents this year. While going through some old family photographs, I came across a picture of Nicholas and Theresa visiting The Chelsea while on vacation in Atlantic City. The photo must have been taken shortly after my grandfather returned from WWII. I found the photograph right before I left for Bizarre AC. 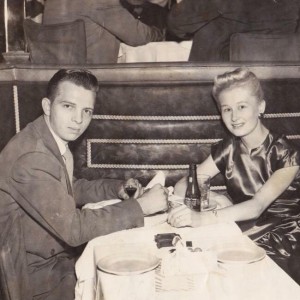