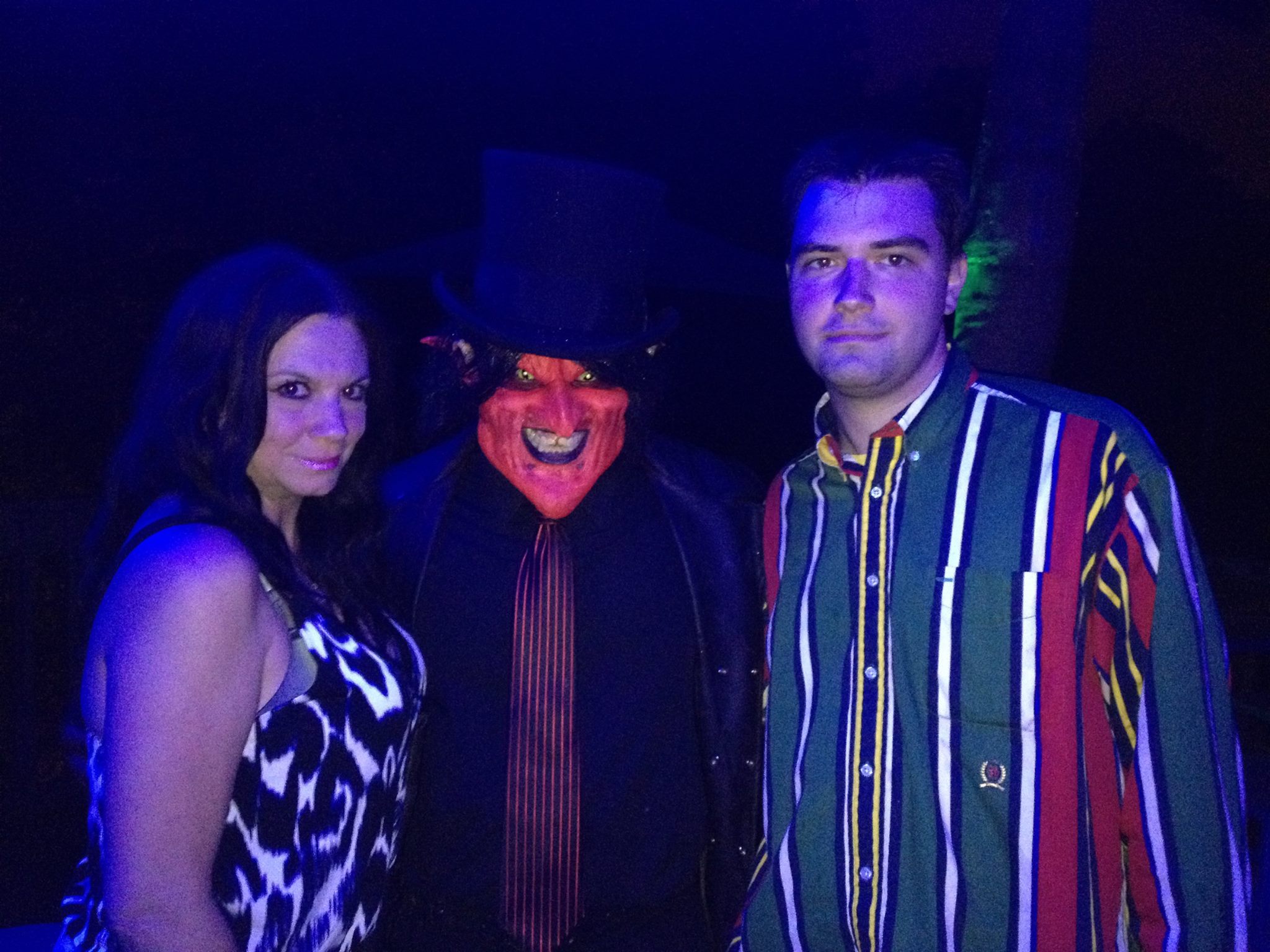 The horror … the horror

I originally intended to host a book release party for Bliss at the French bistro in my apartment building. Unfortunately, the restaurant temporarily closed while the proprietor flew back to France and tended to her ill mother. My plans to hold a party for Bliss during the late summer months were suddenly upended, and I scrambled for a new location. Ultimately, I decided to push my release party back until  the bistro reopened.

It was quite serendipitous I released my new novel at the same time two local horror conventions hosted their inaugural events. I’ve been a horror fan since around the time my eyes first opened and quickly decided these cons would be the perfect substitute for my book’s release party.

Scheduled first was the Mr. Hush Weekend of Fear held at the Woodlands Inn & Resort and thrown by promoter David Lee Madison as a way to advertise his low-budget horror film. Several well-known actors from Mr. Hush, including Brian O’Halloran and Steve Dash, made appearances at the convention. The featured guests were Kane Hodder from the Friday the 13th series and makeup maestro Tom Savini. 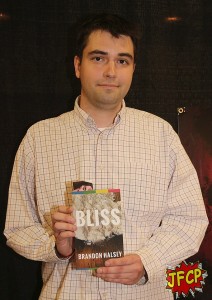 Because this was my first convention, I didn’t know what to expect. I studied the other tables around me and admittedly felt nervous about my prospects – I wasn’t selling film posters, memorabilia, or anything that came with a built-in fan base. I had to convince potential customers to take a chance on a horror book they never heard of before… but I shouldn’t have worried so much. The reaction to my book was incredible, and I was thrilled to have such a successful debut. During the weekend I also gave a number of interviews in promotion of Bliss to outlets like WILK RADIO and the Dark Discussions podcast.

I was also extremely pleased with the approachability of the celebrity guests. Where else can you start the day by receiving a fist-bump from two of the actors who played Jason Voorhees? Kevin Spirtas, who I was familiar with thanks to my well-worn VHS copies of Subspecies: Bloodstone and Subspecies: Bloodlust, was quite intrigued upon reading my book’s synopsis and I gifted him a complimentary copy in return for the countless hours of entertainment and scares he gave me as a youth. Kane Hodder was very gracious to his fans, posing for numerous photographs and signing whatever put in front of him. After the con, Tom Savini could be seen wandering around the Woodlands in his bathing suit, on the way to the hotel pool and jacuzzi.

In addition to the vendor rooms and celebrity signings, Weekend of Fear hosted several other events sure to please horror fans including celebrity Q & As and cast reunions. There were also numerous film screenings over the three days that gave Pennsylvania filmmakers like Bobby Keller a chance to show their work. I didn’t have time to leave my table and attend any of the screenings, but I met some of the filmmakers behind Holiday of the Dead and had a great time drinking with them at the after party. 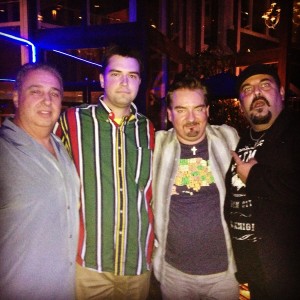 On Saturday night, Brian O’Halloran hosted celebrity karaoke, and I was joined onstage by Clerks star Marilyn Ghigliotti – we performed a rousing rendition of Love Shack and were clearly the stars of the show.

On Sunday night, after the event, I headed down to the streamside bar where I spent the rest of the night drinking with Kane Hodder and Leatherface: The Texas Chainsaw Massacre III star R.A. Mihailoff (who was actually in town for another convention and just wanted to knock back a few with his favorite onscreen Jason Voorhees.) I had a great time selling books, signing autographs, posing for pictures, and making a tidy profit in the process.

FANtom Fest was thrown the following month at the Scranton Hilton & Conference Center. Never before have I witnessed such a poorly organized event.

A massive embarrassment on every level, I talked to many vendors who all deemed FANtom Fest as the worst horror convention they ever attended – I had to agree. The blame ultimately lies at the feet of the con’s promoter: the alliteratively named Nico Nice.

I had a bad feeling about the convention well before the doors first opened. I sent many unacknowledged emails to Nico Nice before the event, inquiring about about the floor plan and other vendor information not listed on his crude website. When Mr. Nice stopped by my booth at Weekend of Fear he apologized for not returning my emails and promised to send out all relevant information the following week. Despite his empty promises, that was the last time I heard from him. If a promoter doesn’t have time to answer a simple email about a floor plan, then his event isn’t worthy of your time.

Mr. Nice was apparently in over his head, and his lack of proper planning crippled the event. I have been to the Scranton Hilton & Conference Center many times, and while it is a beautiful space and perfect for wedding receptions or business conferences, it was a terrible venue for a horror convention. The Scranton Hilton doesn’t have the wide-open layout needed for a proper convention, and the many stars and vendors stuck in a series of small rooms and hallways spread throughout the floor. The Radisson Hotel, only one block away, would have been a much more suitable venue.

My table was set up in a hallway with two other vendors. We were close to the restrooms but not much else; most attendants didn’t realize we were even part of the event because there weren’t any signs posted directing patrons to our particular hallway until late Saturday afternoon. My neighboring vendors were Michael and Shell DiBaggio, the married creators of Ascension Epoch and Horror Show Jack who crafts custom vampire fangs. Mr. Nice had previously told the Ascension Epoch scribes they would be the only writers at the convention even though I signed up before they did and the promoter was familiar with my book.

On Saturday morning I arrived at the hotel before FANtom Fest was set to open. Imagine my befuddlement upon seeing that Geisinger Health Systems had set up several booths at the horror convention and displayed signage throughout the second floor of the hotel. Until 4 pm my hallway was overrun with doctors and nurses in town for a medical conference – unfortunately, these medical professionals were not horror fans and failed to stop by my table.

Geisinger Health Systems monopolized the convention’s screening room with their classes and PowerPoint presentations. Should I assume it was just coincidence the FANtom Fest scheduled movies to begin playing at 4 pm, the same time the doctors left, and Nico Nice had no advance knowledge of the doctor’s presence? We vendors were not informed about Geisinger beforehand or even offered a chance to move our tables to a more appropriate location after the doctors had set up.

Because Geisinger signs were plastered throughout the hallway and FANtom Fest posters were not, horror fans once again had no clue as to our presence. At night the doctors left, replaced by a wedding reception. The new bride was none too pleased with horror fans dressed like Freddy Krueger and the Grim Reaper walking around the hotel. She began screaming at several of the vendors, and hotel security broke up the fight.

Mr. Nice had promised that his guests and vendors would see over 3,000 ticket buyers for the weekend, but in actually less than 1,000 horror fans passed through the maze-like conference rooms of the Scranton Hilton. I felt sorry for Zachary Zbegner and other the camera operators over at Voyager Video responsible for filming a promotional video of the event. Voyager Video spent most of their time filming the empty signing rooms and bored expressions on celebrity faces. Unable to shoot any decent crowd shots, they were forced to film the guests at the doctor’s convention and wedding reception, faking the mise-en-scène, so it appeared as if the doctors, nurses, and those in the bridal party were enthusiastic (and well-dressed) horror fans. That’s some movie magic!

For a horror convention of such limited size, both the vendor tables and ticket prices were exorbitantly priced. One vendor complained that he was charged for two tables but only given one. Other vendors were quoted different pricing for the same amount of space – we all felt bamboozled.

I was also very disheartened when Nico Nice didn’t bother introducing himself to the vendors and artists; at the very least he could have thanked us for coming or offered a simple “good luck with the show.”

Still, the event wasn’t a total loss, and it was great interacting with the fans. After just one previous convention appearance my name quickly spread among the horror community, and I had some interesting conversations about my novel and the creative writing process. I also had a great time interacting with the other vendors, artists, and celebrities.

I also met Jeremy London, star of Mallrats, when we stood next to each other at the restroom urinals. What could have been an awkward encounter turned humorous when my phone suddenly rang, and Mr. London told me had the same ringtone.

Down in the hotel bar, I met Jonathan Tiersten and Frank Sorrentino – stars of the cult classic Sleepaway Camp and the new horror film Blood Reservoir. They scolded me on watching their famously screwed-up film before I was even ten years-old, but both took home a copy of Bliss. Frank even asked if I would help him with his upcoming autobiography.

The highlight of the convention was meeting Rochelle Davis, star of The Crow. Ms. Davis was an incredibly lovely woman and bought one of my books – the highlight of my professional career. The Crow was vital during my formative years, and it was one of the first films that made me fall in love with the movies.

After a disastrous Friday and Saturday, I hoped Nico Nice would pull it all together for a successful final day …. Sunday’s film screenings were scheduled to start at 10 am with a showing of the original Texas Chain Saw Massacre followed by the Halloween remake and Re-Animator. For some unknown reason, the movies began four hours late.

Though the convention didn’t end until 5 pm on Sunday, a visibly distressed Jeffrey Combs exited the hotel hours earlier. Due to that day’s scheduling snafu, Mr. Nice decided to cancel the 30th-anniversary screening of Re-Animator. Mr. Combs, understandably upset when his most famous film received the ax, left the hotel and never looked back.

Nico Nice has turned to crowdfunding as a way to raise money for the next FANtom Fest – he’s currently raised $5 of his $52,000 goal. Unlike most crowd funding campaigns that offer prizes or incentives for the donors, Mr. Nice isn’t providing so much as a free ticket or tee shirt – just another example of how entitled Nico Nice feels entitled to the hard-earned money of real horror fans. Let’s hope this is one con that won’t rise from the dead.